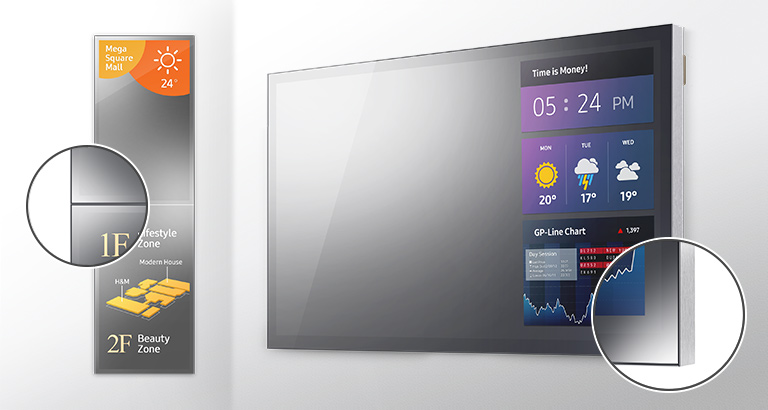 Digital Signage – one of the most promising and fastest growing areas in the field of audiovisual and IT systems. According to analysts, in the next five years, sales of professional advertising and information displays will grow four times. This segment is growing rapidly. Today, customers understand why they need these solutions and how they will use them.

Today Digital Signage system – is not only placards to display the schedule of flights and departure / arrival times of trains, advertising displays, electronic billboards and advertisements, reference and auxiliary systems (eg, interactive information kiosks). As pointed out by the Director of Corporate Sales LG Electronics, information display systems are used in virtually every industry. Historically, they have proliferated in the retail trade, but are now used in a variety of organizations.

According to the manager on work with key clients of the company NEC Display Solutions (NEC divisions) originally Digital Signage System is an information board on the crossings. For example, at the airports they serve to display flight information, flight schedules, information on departure and arrival, advertising content. Later, they were used in the commercial, entertainment and many other fields. This set of hardware and software for the creation, transmission and display of information can be used in various fields of the economy.

In particular, Digital Signage systems are used in the corporate television, as well as various design decisions during the design of the premises. However, the demonstration of dynamic advertising remains the most popular way to gain attention of the target audience in the right place. Due to the versatility and flexibility of Digital Signage systems, they are able to show a variety of information and submit materials (text, photos and video) designed for specific audiences.

These solutions are applicable in any industry – from the heavily visited outlets to information panels in public places, advertising displays in banks and universities. Offered products vendors can be used as presentation systems in the heads of offices, meeting rooms and conference rooms, as well as displays of large format for internal communications in office buildings, electronic posters and advertising signs to be placed in the sales rooms.

Digital Signage Applications are used as an advertising medium in public places, digital menu points in the power, video walls, interior elements and branding, interactive showcases and corporate TV. However, the essence is always the same – communication with the audience that is outside the house, through digital media (Digital Out of Home).

Digital Signage has always attracted the attention of the public. With proper implementation of the Digital Signage provides a lot of advantages: the provision of relevant information, the possibility of a flexible targeting, change at the touch of a button, centralized management, a dynamic, vivid picture. Digital Signage Solutions are changing methods of advertising, product promotion, and broadcasting on the target audience, be it education, business or commercial installation. However, they are characterized by certain problems.

Uncertain ROI. The cost of deployment may be too high due to the need to install large outdoor LED screen, but also in the case of relatively inexpensive LCD or plasma displays deployment of large installations require considerable investment, so the return on investment must be carefully justified. Meanwhile, during the advertising campaign with the help of Digital Signage consumers drew more attention to the product being promoted and remember its name and description. It should be noted that the cost in recent years, the deployment of the system for a small shop or café greatly decreased, which means that you can count on a quick return on the project.

Lack of compatibility. Digital Signage Products are typically closed systems. Advertising campaign in several networks Digital Signage, built on the basis of different products, due to the technical difficulties which are not seen on television and the Internet. The absence of a common communication protocol makes it difficult to work with multiple networks, it increases cost and complicates the extension of the networks themselves. Currently, organizations such as the Point-of-Purchase Advertising International (POPAI) and the Outdoor Advertising Association of America (OAAA), actively develop and promote open standards that enable communication between dissimilar networks. This should increase competition among suppliers and lead to a decrease in investments (CAPEX) in deploying Digital Signage.

A complex chain of suppliers. The project Digital Signage network deployment contractors may be involved in the following areas: displays, media players, software, planning, installation, maintenance, network and network equipment, the creation of content, advertising sales. So project management is a difficult task. At present, the individual segments of the long chain is gradually being consolidated and market players together and expand the scope of its competence.

Incomplete understanding. Despite the development of technology and popularity, the general lack of understanding of its foundations – a frequent phenomenon. Digital Signage TV is not in terms of audio content, or in terms of size and position displays. However, more and more increasing exhibition activity and the increase in the number of conferences organized by the thematic experts contribute to a better awareness and wider audience.

Users who found this page were searching for:

We use cookies on our website to give you the most relevant experience by remembering your preferences and repeat visits. By clicking “Accept”, you consent to the use of ALL the cookies.
Cookie settingsACCEPT
Manage consent

This website uses cookies to improve your experience while you navigate through the website. Out of these, the cookies that are categorized as necessary are stored on your browser as they are essential for the working of basic functionalities of the website. We also use third-party cookies that help us analyze and understand how you use this website. These cookies will be stored in your browser only with your consent. You also have the option to opt-out of these cookies. But opting out of some of these cookies may affect your browsing experience.
Necessary Always Enabled

Any cookies that may not be particularly necessary for the website to function and is used specifically to collect user personal data via analytics, ads, other embedded contents are termed as non-necessary cookies. It is mandatory to procure user consent prior to running these cookies on your website.